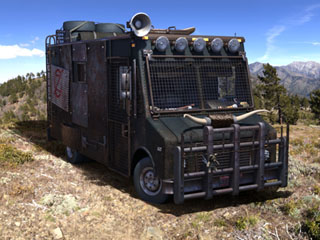 We dropped $9K on a step-up van. I bought it from these guys I had met at the New Orleans Comic-Con last year. Get this, it’s a zombie survival vehicle. They used to drive it on to the floor of the show and let people take pics (for $5) of themselves in the vehicle. I drove it straight to a body shop to have a few things added. They’re adding a steel front grill, and changing the black water (where your crap and piss go in the recreational vehicle’s bathroom) and grey water, where the sink and shower water goes. My new tanks will hold an additional 60 gallons of gas. The zombie conversion the guys had done, were meant to allow someone to live in the vehicle. I’d laugh at how perfect the situation was for me, if I didn’t think I was still, probably, gonna die.

Good news, my two older brothers both believe me. I think my parents do as well, but they don’t really seem concerned. I sent everyone (and myself) shortwave radios. I want to be able to talk to them once everything goes down. Guy I purchased it from online, was asking where I was going to be taking the class to get a license to use it. LOL

Some of you who have been following this blog since I started it a couple of days ago, have given me some amazing tips. I’ve got great bugout bag lists and I just purchased and had shipped, a bunch of items (like an amazing generator) to the location we’re going to in Northern Michigan. There’s no way I could haul all of this up there in the van.

Also, raised another $10K through some more items sold to the local Pawn Shop. I know the owner, so I told him why I’m doing that… he’s this hilarious Larry Flynt type guy, lots of money, huge house in the French Quarter… He also gave me some tips on additional weapons.